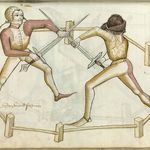 What's in a Book?

I am often asked what makes Fight Like a Knight (FLaK) different from other organizations that teach swordfighting. My answer is always “authenticity.” If we disregard fencing (as it is well-documented has been studied for centuries and is a wholly different art-form) and focus solely on FLaK’s core curriculum of medieval-style combat using period weapons such as broadswords, longswords, axes and various polearms, the differences become quite apparent. FLaK training is based on the reality of a to-the-death swordfight between two similarly-armored combatants. The battles are full-speed, full-contact and unchoreographed engagements where a small set of rules exist solely for the safety of the modern-day fighters, much like where in a martial-arts sparring match, strikes to the eyes or throat are not allowed even though in a real encounter they would be among the primary targets.

So what is this “authenticity?” Before we can get into that we need to look at a few things. Most modern-day swordfighting is taught from the few historical books that exist on the subject (the most widely used being the Talhoffer manuscripts – more on this in another post), which is, in and of itself, dubious. During the middle ages, the training and techniques used by an army or even an individual would have been highly guarded secrets. Imagine if Duke William II of Normandy ordered the publishing of a book on how the French-Norman army trained and the tactics it deployed on the battlefield. The English would have decimated them and the Battle of Hastings would not be as we know it today. So, we have to question WHO published these works. Surely not an actual active swordsman, knight, or military leader, for his very life would depend on any advantage he could gain, and his training methods would be at the fore. Thus, it seems far more likely that these earlier treatises were scribed by a witness, or someone who had a passing familiarity with actual combat.

This brings us to the next point, which is that techniques described in these books in the context of two similarly armored and armed opponents, being some sort of leather and metal armor, a broadsword and a shield, are highly ineffective. I say this for two reasons, first and foremost of which is the fact that most of the techniques described and illustrated in the documents pertain to judicial engagements to settle some legal matter, where the combatants are unarmored and the fight is not mortal. These are very posed, choreographed, specific maneuvers that, in the course of a real swordfight, for which the opportunity would rarely present itself.

The second, and more profound reason for the ineffectiveness of the techniques described in these book and taught by other swordfighting schools is simply that there is little to no attention placed on what it would take to kill your opponent. This is the core of FLaK’s teachings, and it starts with the simple philosophy that if you cease to throw killing blows, you have lost the fight, and are, for all intent and purpose, fertilizer for the lilies that will surely grow over your corpse. The kinesthetics required to consistently deliver lethal blows to an armored opponent are not addressed or taught, and for the most part, the instruction places the fighter in highly undesirable positions that would result in the almost immediate death when pitted against a skilled combatant.

FLaK is authentic swordfighting at its core, cased in a minor set of rules for safety, where, ultimately, participants learn the skills that they would have required to survive day-to-day life in the middle-ages. For actors, these skills translate into powerful, dynamic and exciting physical performances that set them apart from their peers and cast-mates. Anyone training with FLaK will garner composure, balance, core-strength, kinesthetic-awareness, and the “I know how to handle myself” stride comes with being a seasoned swordfighter equipped with the tools take on the mightiest of foes.

- In Honor and Chivalry.

tagged with Musings
Back Next